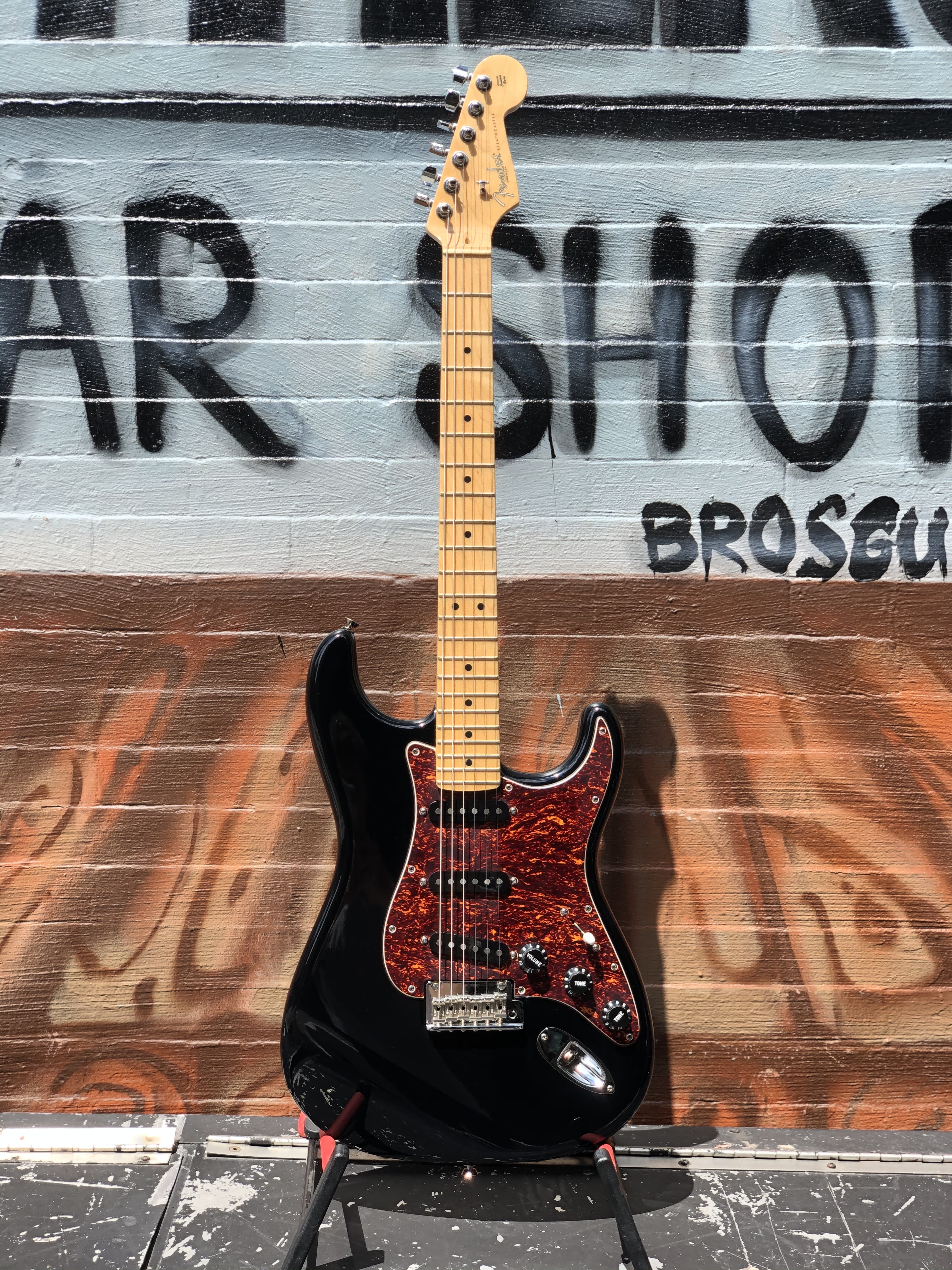 The Stratocaster family tree has grown tall and wide over the years, but the Fender American Standard Strat carries on the original legacy of the model in its purest form. It is an axe that can do it all, the swiss-army-knife guitar, but still has enough signature tone in its glassy, bell-like attack to have a world unto itself. For anyone looking to have only one guitar, the Fender American Standard Stratocaster has to be part of the discussion.

This Stratocaster is in near-mint condition. A couple of unnoticeable scuffs mark it down to excellent. You wouldn't be able to notice it if you weren't trying to find it. This guitar is professionally packaged and shipped with a soft-shell case. Its set up is performed by one of Manhattan's best technicians!

This product is inspected, tested and set up by Manhattan's very own Brother's Guitar Shop!

When someone thinks of the idea â€œelectric guitar,â€Â a mental image of a Fender Stratocaster usually pops into their head. Any search for electric guitar clip art will prove as much. The sheer number of imitations, both corporate and homebuilt, are further evidence that the Strat is etching itself into our collective unconscious. Six decades after its launch, the Stratocaster is a guitar that remains above trends, working its way into the pantheon of timeless human ideas.

Leo Fender claimed the Stratocaster was in development before the Les Paul debuted in 1952, but thereâ€™s no doubt the competition accelerated the timeline for the Stratâ€™s eventual launch in 1954. Through 1981 the Stratocaster continued production under a single name. In the early 1980s, the model saw some experimentation while production moved from Fullerton to Corona. With the blooming Japanese market, Vintage Reissues and SuperStrat variations, Fender realized it needed to protect the identity of the original, launching the Fender American Standard Stratocaster in 1986.

Read more about the history of Stratocasters here.

While the model was briefly renamed the American Series Stratocaster from 2000 to 2007, the germ line continues today again as the Fender American Standard Stratocaster. It remains the go-to choice for millions of musicians who need a well built, no frills guitar that looks sexy but still has deep history and credibility. The fact that countless professional guitarists who can afford any guitar still choose to have at least one Stratocaster in their arsenal is a testament to its magnetism. Not to mention the guitarists whose careers are inextricably linked to the model, such as Eric Clapton, David Gilmour, Stevie Ray Vaughan, John Mayer, and Mark Knopfler to name a few. It is the guitar that can do it all, the swiss-army-knife guitar, but still has enough signature tone in its glassy, bell-like attack to have a world unto itself. For anyone looking to have only one guitar, the Fender American Standard Stratocaster has to be part of the discussion.

How does it compare to the original?

To the untrained eye, most Stratocasters look the same. But the devil is in the details. The original 1954 Stratocaster had an two or three part Ash body covered in a nitrocellulose two-tone sunburst finish, with a single layer white pickguard held in place by eight screws. The knobs and pickup covers were made of brittle ABS plastic (often mistaken for true Bakelite), while the .200 inch diameter pole pieces within the pickups were staggered. The neck was a single lacquered piece of hard rock Maple with no separate fingerboard and a radius of 7.25 inches. The tuners were nickel-plated Klusons, and the pickup selector was only three-way.

The current Fender American Standard Stratocaster uses an Alder body covered in a urethane three-tone sunburst finish, with three-layer parchment pickguard held in place by eleven screws. The knobs and pickup covers are made of a more durable plastic, and the pole pieces have a slightly smaller .187 inch diameter, though the model now comes with Fender Custom Shop Fat â€˜50s pickups, which include period correct cloth-covered wiring. The neck is Maple with a separate Rosewood or Maple fingerboard with a wider 9.5 inch radius, and has a satin urethane finish on back for a smoother feel. The tuners are chrome Fender-designed sealed units, and the pickup selector is now five-way (including the hum-cancelling 2 and 4 â€œquacktoneâ€Â combination positions).

So, there you have it. Over sixty years, the differences boil down to the wood used, the actual polymers used for the finish and plastic, the tuners and the fingerboard radius. The tremolo unit has changed in subtle ways as well, but these are very nuanced differences. Aside from some small changes in pickup wiring and making the 2 and 4 pickup positions â€œofficialâ€Â (players would stick the selector there even before it was a locked position), it is the same design, still built in California, still offering the quality, comfort and versatility that made it an icon in the first place.

How has the model changed since 1986?

Interestingly enough, the Fender American Standard Stratocaster has moved closer to the original â€˜50s design over the last thirty years. In 1986, the saddles gained mass and had more of machined, slotted look instead of the bent stamped metal that the original and the current American Standard have. For a period during the late â€˜80s and â€˜90s, Strats had two string trees, where the current model returns to the original single tree setup. Aside from some small changes in the trem block, finish gloss, and pickup wiring, there really werenâ€™t many other changes. All things considered, only the â€˜70s Strats - with their three-bolt necks, bullet truss rods and large headstocks - and the short-lived early â€˜80s Strats with the top jack, two knobs and heavier bodies ever significantly departed from the main template.

This is a question that comes up time and time again on message boards and during bar stool debates. The answer is going to be different depending on what the person youâ€™re talking to values most. The made-in-Mexico Standard Strats have a polyester rather than urethane finish, 21 frets instead of 22, and an ever so slightly narrower (by .035 inches) fingerboard, though the radius is the same. The trem on current MIM Strats a six-point vintage style block where the Fender American Standard uses a modern two-point synchronized unit. The pickups use slightly different wiring, but definitely sound like a true Stratocaster. At the end of the day, it is the same guitar built with lower-cost versions of the same materials in a different factory with lower labor costs. Any other differences stated beyond this dive into the nuances of wood cut choices and strictness of quality controls.

If youâ€™re looking for sheer bang-for-your-buck value, the made-in-Mexico Standard Stratocaster is nearly unbeatable. Playing a show or recording, especially if using a decent amp and rig, most audience members would not be able to tell the difference. You get 98% of what the Stratocaster is all about for 38% of the price. However, one could make the same argument about the Fender American Standard Stratocaster compared to all its rivals. It also delivers amazing value, and in our humble opinion, has something about it that does feel different when itâ€™s in your hands. Call it confirmation bias, or sentimentality, or even placebo, but the fact remains that there is much less risk of feeling regret if you spend the extra dough and choose the American Standard.